In our last episode, Pestbuster pursued Pest right through the strip, leaving a mess in his wake. The UML Guy told The Reader they would need Class Diagrams to help in the clean-up, and said they wouldn’t find any without a road trip. 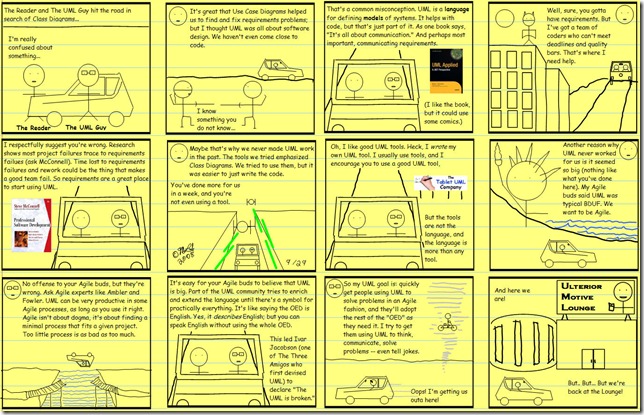 Yeah, I know… A lot of blah, blah, blah, yackity-smackity… But these were things that needed to be discussed. A road trip is always good for a long discussion.

Here’s the key to today’s references…

The car is a 1973 AMC Gremlin X, to be precise. Just in case you had trouble recognizing it.

Neither fencer is left handed.

Actually, this book has one comic. But it clearly needs more.

The premier for this film was the second-biggest event in my life that week. (Somehow that whole wedding/honeymoon business won first place…)

Steve McConnell has written many valuable books; but in my opinion, this is the most important of them all.

Do I really need to explain this reference?

Take your stinking paws off me, you damned dirty ape!

BDUF == Big Design Up Front; a.k.a. The Boogeyman, if you’re on an Agile team.

…or this from Martin Fowler…

Both are inspirations for the Lounge.

The car that made the jump in this film was actually an AMC Hornet X (heavily modified). But the Hornet was the basis of the Gremlin, so it’s close enough.

Until you know every word in the English language, you cant speak English, right?

The Three Amigos — Grady Booch, James Rumbaugh, and Ivar Jacobson — wrote the first draft proposals for the UML, as well as some valuable UML books. Jacobson’s point — as captured in this video — is that the “OED” UML is too much notation for most people, and confuses more than it communicates. He recommends that we identify and promulgate an “Essential UML” for most developers to learn, and leave the detailed notations to teams and projects that need them. I agree, and recommend that a good start would be to go back to UML proposal 0.8 — i.e., the work of The Three Amigos.

Sometimes, when I look at my own code, I find myself humming: If I only had a brain…

And the question must be asked: will anyone catch the Dukes of Hazzard reference?

One thought on “Ulterior Motive Lounge Episode 5: To Gumball, and Beyond!”