The Number One Rule of UML Tools: They all have quirks. Every single one of them. They’ll all drive you nuts, and frustrate you, and disappoint you. So a little frustration and disappointment shouldn’t make you give up on a good tool. You just gotta compare it to other tools, see if it does what you need, and then learn to cope with/circumvent its quirks.

(And you whiteboard guys who say, “See? Quirks! You should just give up and use a whiteboard! It has no quirks!”… It has no memory and no consistency, and those are just the start of its quirks. I’m not saying you picked “the wrong tool”. I’m saying you have compared it to other tools, decided it does what you need, and learned to cope with/circumvent its quirks. Don’t think it doesn’t have them, too.)

They are pretty, aren’t they?

I draw many of my production diagrams these days with Enterprise Architect from Sparx Systems. I also like Visual Studio Team System, with its tight integration with process tools. I find that to be top-notch; but Enterprise Architect is my second-favorite UML tool. It’s incredibly powerful and full-featured, especially at the low price of $199 a seat!

EA is the primary UML tool I use in my consulting work, and I often persuade my clients to purchase it as well. It’s also the tool I use when I given UML talks. And although I teach my one-day UML class with just pen and paper to keep things simple, I teach the students to use EA in my longer classes. I have them install the trial version; but by the end of the week, they usually decide to buy it. It’s that good, and I show them how to get productive use of it quickly.

There are only two words you should never believe: “only” and “never”. 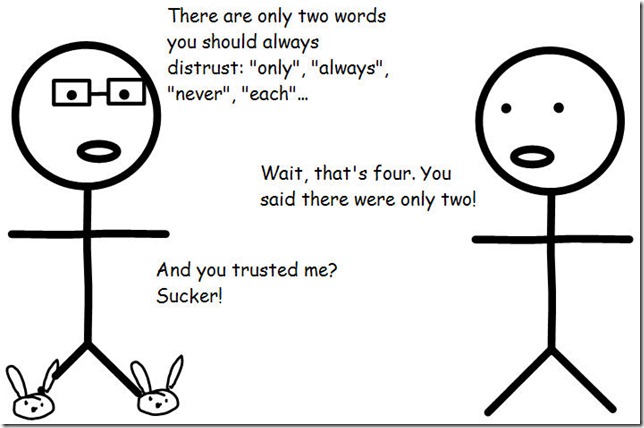 Or if it’s not the right time to be challenging them, make a note of it; and then later, come back and challenge them and make them defend it and prove it and put it in writing.

And so on. But to stakeholders, as my buddy Curtis Gray says, absolutes are figures of speech, meaning “mostly” or “seldom” or “as far as I can recall”.

So developers need to nail down these assumptions. Probe and question to determine whether these are really absolutes, or only general rules. Assuming that they’re absolutes can be a major cause of unforeseen bugs. “But they told us they would never do that!” Well, they did it. The code’s broken. Everyone’s unhappy. All because you weren’t just a little more persistent during the requirements analysis stage.

In terms of UML, this commonly comes into play with multiplicity, the range of possible participants in a relationship. This can be stated as a number, a set of numbers, a range of numbers, or any combination of the above; but most commonly, you’ll see:

In UML-speak, * stands for what mathematicians and others have commonly called n: an unspecified quantity. So if a publisher, for example, tells me that a book has 1 or more chapters and some number of authors, each of whom may be an author of multiple books, I’ll draw this picture:

But I won’t stop there. I’ll use this diagram to start asking questions, and responding to answers:

Then I would redraw the picture just slightly to reflect what I learned:

I would use the diagram both to capture information and to promote further conversation. Never just draw what you “know”. And never accept an absolute at face value!